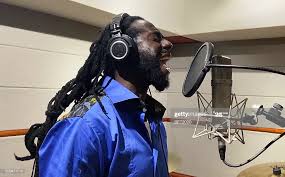 “Buju Banton is unequivocally the greatest reggae artist to have ever commanded a microphone. The man born Mark Anthony Myrie is a living legend, world class deejay, breaker of records set by the honorable Robert Nesta Marley, revolutionary and ambassador of the Jamaican sound called “Dancehall.” Born in the Kingston slum of Salt Lane, he’s made a career of teaching music lovers how to love and be loved; how to cherish women; and how to march toward triumph in spite of setbacks; how to Bogle; how to live better. “Reggae music’s mission is to uplift, educate and eradicate negativity from the minds of the people globally,” says Banton. “I won’t let that change.”

Today, after nearly three decades of dominance, Buju is primed to pen his next chapter. The icon has recently aligned his own Gargamel Records with the house of another GOAT: Roc Nation. After an eight-year hiatus, he is set to continue teaching via his eleventh studio album, a yet-to-be titled global audio experience sure to please his oldest fans and welcome in a new faithful.

The first single, “Trust,” produced by longtime Buju collaborator Dave Kelly (Bounty Killer, Beanie Man), aims to wake up our digital-dependent society. The peace rally that “Murderer” began in 1995 continues with the single “Steppa,” offering a best-foot-forward alternative to the “Shotta.” The record’s cinematic video surpassed one million YouTube views in less than a month. The album’s equator is formed by its future singles. Banton refers to the lows and soaring highs of his life as a “rollercoaster” for which the poetic realism of his new album speaks directly.

Buju Banton was raised by two hardworking parents as the youngest of 16, which includes 15 sisters. His mother gave her chunky toddler with the insatiable appetite the nickname “Buju” (a breadfruit in Jamaica). Banton, which represented a fierce deejay, was added on later. By age 16, Buju was already recording his first song (“The Ruler”). His next underground hit, “Stamina Daddy,” would spark his career, initially becoming the title track of his 1992 debut album (the album was later repackaged and retitled Quick). Buju’s massive follow-up Mr. Mention, which revolutionized dancehall with classics “Batty Rider,” “Man Fe Dead,” and the early feminism of “Love Me Brownin” and “Love Black Woman,” dropped the same year allowing Banton to break Bob Marley’s record for #1 hits.

Buju spent the next two decades releasing sterling album after album––Voice of Jamaica (“A Little More Time,” “Deportees”) to ’Til Shiloh (“Champion,” “It’s All Over”), to Before the Dawn, which won the 2011 Grammy for Best Reggae Album. His newest chapter began in 2018, when after a seven-year hiatus, he landed on longtime buddy and collaborator DJ Khaled’s recent album Father of Asahd (twice). A relationship between the reggae icon and Roc Nation began to blossom. “These men aren’t just making music to capitalize on people’s talent,” says Buju of Jay-Z and co. “They truly have a vested interest in the congregation of truth, rights, justice, liberty for all of us.”

On March 16, 2019, the first date on his “Long Walk To Freedom” tour, Banton’s highly anticipated return made worldwide history. Over 30,000 of his most loyal fans from around the globe filled Kingston’s National Stadium to see Gargamel perform for the first time in nine years. Jamaica’s King was home.