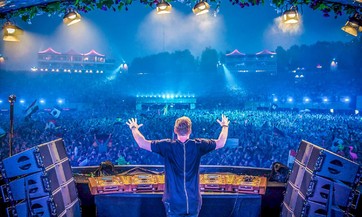 One of the leading headline DJ/Producers in the world of electronic music, label boss of an award-winning imprint, award winning documentary film maker and a philanthropist behind a global education initiative, these are only a handful of the facets that makeup the impressive spanning career of the Dutch dance music pioneer Hardwell. His continuous development as an artist can be traced all the way back to his early teens, where music maturity came swiftly for the now seasoned-veteran, yet today it is an international presence that has taken his music to the top of numerous music charts, whilst seeing him performing at every major event on the planet.

From original hit singles to collaborating with the likes of Craig David, Jason Derulo and Austin Mahone, to remixing A-list stars such as Rihanna, Example, Moby, The Wanted and Coldplay, Hardwell’s studio output remains ever prolific. Whilst his DJing has taken him to the biggest stages around the globe that include Ultra Music Festival, Coachella, Tomorrowland, Lollapalooza and EXIT festival, including 2 x I Am Hardwell world tours taking in venues such as London’s Brixton Academy, Germany’s Hockenheim circuit, The Forum LA, and New York’s Madison Square Garden.

An offshoot from his high-profiled touring schedule came a philanthropic project on a truly grand scale. Founding the United We Are Foundation. On December 2015 he hosted an aid event labelled the ‘World’s Biggest Guestlist’ in Mumbai’s DY Patil Stadium where he was joined by 70,000 fans on his own personal guestlist. Watched by over 10 million people via the livestream the event raised enough money to school over 22,000 children for the next 10 years. After its previous success, Hardwell and Guestlist 4 Good hosted a second aid concert on December 3rd 2017. The event succeeded in drawing a capacity crowd of close to 75,000 people at the D.Y. Patil Stadium and achieved the ambition of generating enough donations to provide education for 100,000 children from the slums of Mumbai.

Hardwell has always continued make waves and bring crowds and cultures together throughout his career. In May 2018, he also took his high-octane, uniting sound to headline the UEFA Champions League Final Festival in Kiev and rocked the tens of thousands of fans to their core. Whilst for Autumn 2018, Hardwell announced that he will be performing with the full Metropole Orchestra for a unique one-off show at Amsterdam Dance Event (ADE) called ‘Symphony: The Global Revolution of Dance’. This 30 years of dance music special concert will see Hardwell merge with the world’s leading pop & jazz orchestra to take the audience on a musical journey through the history of dance music, with an all ages concert that starts with the rise of dance music in the 80’s and ends with the mega hits of today.

Always striving to push boundaries with his music and DJ craft, Hardwell also utilises technology to the advantage of his fans. He was the first artist to ever release music via the music mobile app Shazam, he was also the first artist to host a 360-degree event live stream and to develop his own Facebook Bot, which in turn created a whole new digital experience for his fans. He adapted to Blockchain technology before any other being the first DJ to put his rights into a blockchain. With an ongoing profile for technological advances in his career, Hardwell made an appearance at the 2017 edition of the NextWeb conference in Amsterdam.

With so many exciting past and present projects to his name, it should come as no surprise then that this critically acclaimed reputation has led to him catching the attention of the world. With over 9.1 million ‘likes’ on Facebook, more than 7.98 million followers on Twitter, 5.1 million followers on Instagram and in excess of 844 million hits on his YouTube channel, Hardwell has rapidly solidified his place as one of the electronic scenes most ‘clicked on’ artists. On the airwaves Hardwell’s reach also remains ever present thanks to his radio show Hardwell On Air radio show being available on over 115 FM stations worldwide, reaching over 50 million listeners and consistently one of the most downloaded shows in the world. Add to this nominations in prestigious awards such as 2014 MTV European Music Awards for ‘Best Dutch Act’ and ‘Best Electronic Act’, to being a 2 x World No.1 DJ in DJ Mag’s Top 100 DJs Poll or being one of one of the most nominated artists in the 2016 awards edition of the IDMA’s in Miami taking home 6 awards in total including ‘Best Global DJ’ and ‘Best Artist (Solo)’, and more recently winning ‘Best International DJ’ at the Ibiza DJ Awards 2017. It is clear that as an electronic music artist Hardwell’s profile and music have reached a global level that has garnered international recognition amongst fans and tastemakers alike.