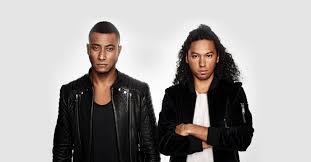 The duo performed all over the world: from the biggest festivals to the baddest clubs. Their music concept Sexy By Nature airs on radio stations globally and translates into stage hosts, programming names like Erick Morillo, Fedde Le Grand, Kryder, Roger Sanchez, Sam Feldt, Steve Angello and Tchami.

During the summer of '18, Sunnery James & Ryan Marciano navigated 60 bookings; a second residency at Hï Ibiza alongside Armin van Buuren; and four festival stage hosts with Sexy By Nature. To top it off, they simultaneously released their Affective EP. Busiest men in the industry? Good thing their energy expands exponentially when they're together!

History
After a chance meeting in 2006 in the clothing store where Sunnery worked, and where Ryan applied for an internship, they noticed a lot of similar interests and started working on some music together. Sunnery James & Ryan Marciano quickly ascended into the upper echelon of dance music producers with the release of monster anthems like ‘Tribeca’ and their remake of Tiësto’s ‘Lethal Industry’. Fans and tastemakers all have supported each Sunnery and Ryan release with the latter track being a weapon of choice for Armin van Buuren, Sander van Doorn, David Guetta and the list goes on and on. Even the don of EDM, Pete Tong made ‘Lethal Industry’ his ‘Essential Selection’ not once, but twice! Steve Angello scooped up their tune ‘Markuzza’ (along with ‘Traffic’ and ‘Snitch’) for his Size Records imprint realizing early on what a masterpiece it was.

The duo’s soar to fame has allowed them to pursue other interest including opening their own restaurant ‘W36’ in Amsterdam with the motto: “Mixing flavors like music”.

Sexy By Nature
In March of 2014, these two hosted their first solo show ‘Sexy by Nature’ in Amsterdam’s Heineken Music Hall. This party started in Ibiza, where the two created the concept with ALDA Events. During their club nights in Ibiza they offered an elegant and seductive evening. Now it was time for a bigger venue and crowd with more Sunnery and Ryan.

2015 is the year in which this dynamic duo host their first full weekend edition of ‘Sexy by Nature’ show. The event took place over the Easter weekend and consisted of one event held in Amsterdam on Saturday and one held in Rotterdam the day after. This Easter edition of ‘Sexy by Nature’ is just the start of a lot of epic shows to come. With stops at locations like NYC, Miami, Ibiza and a residency in Hakkasan Las Vegas, this is going to be one hell of a ride. ‘Sexy by Nature’s’ radio show will be broadcasted on multiple worldwide broadcasting stations, such as SLAM!FM in the Netherlands and SiriusXM in the United States.